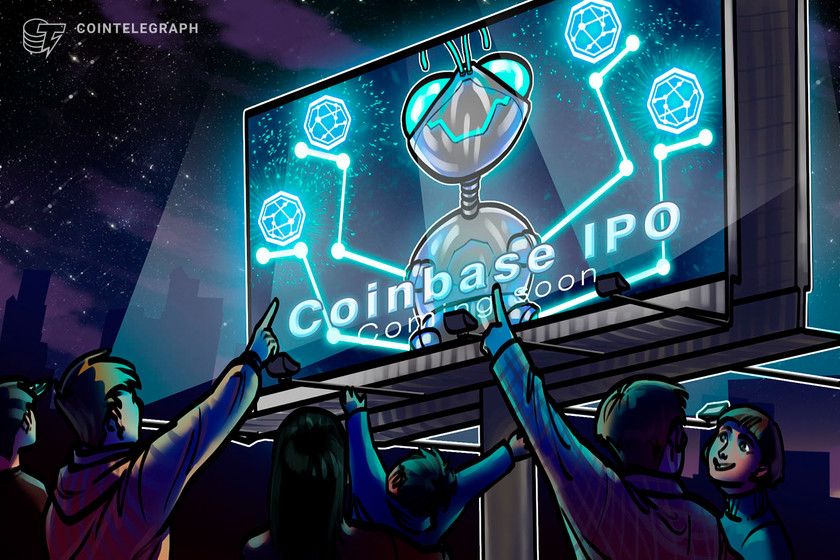 Is a $100-billion valuation justified? Profit margins could tighten with increased competition.

The Coinbase direct stock listing could be a rite of passage for the blockchain and cryptocurrency industry, and the announcement on March 20 by the United States Commodity Futures Trading Commission of a $6.5-million fine against Coinbase for “wash trading” and filing misleading information probably won’t do more than postpone by a few weeks the distinction of being the first crypto-native corporation to be listed on a major U.S. stock exchange.

But questions surround Coinbase’s upcoming debut on the Nasdaq exchange: Is the crypto exchange really worth the $100 billion — as suggested by a pre-IPO public auction? Is its timing propitious? Are the firm’s revenues too dependent on the market price of Bitcoin (BTC) and Ether (ETH)? And are its profit margins really sustainable — is this really an industry breakthrough event, and if so, which crypto enterprise might be next to test Wall Street’s waters?

But first, what is one to make of charges of improper reporting of exchange volume and “self-trading” that were settled with the CFTC? Could they scuttle the listing?

“The CFTC announcement should not really derail investor interest with the Coinbase direct listing,” Edward Moya, a senior market analyst at forex trading company Oanda, told Cointelegraph, mainly because “mainstream acceptance has arrived for cryptocurrencies.” Any fines will have only a short-term effect in his view. Indeed, they might even, in a way, reassure potential investors, providing further confirmation that the space is regulated, Moya told Cointelegraph.

Kavita Gupta, founding managing partner at Delta Growth Fund LP & Fintech.TV and visiting scholar and lecturer at Stanford University, appeared to agree. “As an investor, I would read it as a positive sign that Coinbase is clearing up any possible issues before going public and would play fair to regulatory bodies and the public investors,” she told Cointelegraph.

On the other hand, the fine could impede the listing process, suggested David Trainer, CEO of investment research firm New Constructs, though the fine is relatively small, suggesting that the illegal activity may be seen as relatively inconsequential — “so it might not pose much of an issue in the grander scheme.” That said, “an issue with trading integrity for an exchange is serious — no matter how big or small,” he commented to Cointelegraph.

“The fine is just a slap on the wrist for Coinbase,” declared Bobby Ong, co-founder and chief operating officer of crypto data aggregator CoinGecko, told Cointelegraph, adding: “It was cited as a risk factor in the Coinbase S-1 filing, and this settlement removes one risk factor.”

Back in December, Moya told Cointelegraph that Coinbase’s initial public offering was “perfectly timed” given Bitcoin’s growing investment appeal. Has anything changed?

Not really. “Institutional and retail interest is still in the early stages of mainstream acceptance, and this is the peak time for a bullish perspective with cryptocurrencies,” answered Moya, adding further: “Eventually, over the next few years, governments will clamp down on Bitcoin and push their respective digital coins, and that could lead to concerns that the Bitcoin party is over. […] The pressure is on for Coinbase to go public.”

“It’s a great time for Coinbase to test waters,” commented Gupta. IPOs and the special purpose acquisition company IPO markets are still sizzling; cryptocurrencies have soared in recent months; there’s enormous liquidity; “and demand in the market for tech companies creates the best time for Coinbase to ring the bell.”

But, how much would Coinbase be worth as a publicly owned company? As noted, one pre-IPO valuation put the company as high as $100 billion — is that realistic?

Vladimir Vishnevskiy, director and co-founder of Swiss wealth management firm St. Gotthard Fund Management AG, told Cointelegraph that the $100-billion valuation could be justified given the potential of the digital asset sector and “the impact it could potentially have on our lives in the future.” Moreover:

“If market participants are willing to entertain price targets/predictions for Bitcoin in the $300K–$400K range, is a $100-billion valuation for Coinbase so overstretched?”

Moya, too, was optimistic, though not quite ready to swallow $100 billion. “Coinbase’s market value will probably settle around the $80 billion–$90 billion range, but that could easily change with whatever is the next 20% move for Bitcoin.”

Trainer, by comparison, was skeptical. “A more realistic valuation is probably closer to a 10%–25% of the current valuation,” Trainer told Cointelegraph. “Others have gone so far astray because they lack a reliable fundamental perspective to give them a sense of value according to the underlying economics of the business and its long-term competitive position.”

Along these lines, New Constructs analyst Kyle Guske wrote recently regarding the $100-million tag that “the expected valuation implies the company will become the largest exchange in the world by revenue” — something that’s unlikely, given the rising competition in the cryptocurrency exchange sector and the non-sustainability of Coinbase’s current market share and revenue margins, in his view.

Coinbase’s current ratio of transaction revenue to volume is 0.57%, for example, 57 times higher than margins at Nasdaq and Intercontinental Exchange — both with ratios of 0.01%. Guske wrote:

“If Coinbase’s revenue share of trading volume fell to 0.01%, equal to traditional stock exchanges, its 2020 transaction revenue would have been just $20 million, instead of $1.1 billion.”

Coinbase’s offering would be the Nasdaq’s first direct stock listing, where a company sells shares directly to the public, without using investment banks as intermediaries as with traditional IPOs. Investors would be able to sell their Coinbase’s shares immediately after purchase, too, without the usual lockup period. Some have suggested that a direct listing was also consistent with the crypto ethos of cutting out the intermediary.

Vishnevskiy called the direct approach a “smart move,” adding that it could be popular with retail investors, particularly in light of the GameStop saga. He agreed, too, that it is in line with the anti-establishment sentiment often expressed within the cryptoverse, saying:

“One could also interpret this as an indication of what is to come — i.e., the old ways giving way to new — and it will be the leaders of this new digital revolution setting the game rules, not the other way around. I am convinced there is no bank on Wall Street that would have refused the underwriting business for this listing if it was offered to them.”

“Direct listings are the much fairer way to distribute shares,” commented Trainer, while Moya, for his part, said Coinbase had no choice but to opt for a direct listing because a traditional IPO would have delayed going public until closer to the end of the year. He added: “The retail interest for Coinbase’s direct listing will be very strong, and yes, sticking it to the middleman provides some traders with a bit of added satisfaction.”

Will a successful Coinbase offering spur other blockchain and cryptocurrency companies to go public? “After the Coinbase IPO, there will be a rush of other crypto companies looking to go public either via IPO or SPAC to tap on the frothy valuation offered by the public markets,” said Ong.

Vishnevskiy, too, expected others in the industry to follow with IPOs, though they could find Coinbase’s offering “a difficult one to emulate,” adding: “There are just not many other companies in the industry yet with the same pedigree and history as Coinbase, which is exactly why so many investors want to be part of it.”

Who might be next? “I could certainly see Kraken being a contender for a listing this year, however, whether they could command a similar multiple in terms of valuation will be a big question,” said Vishnevskiy, while Moya answered:

“I’m not tracking any specific private blockchain companies but would probably start looking at SoluLab and OpenXcell and eventually Binance will consider a direct listing.”

Are there other possible obstacles to a successful Coinbase debut as a public company? Vishnevskiy expected the Coinbase listing to be over-subscribed. “The number of shares being offered is not that significant, and I expect high demand from both institutional and retail investors.” The only potential roadblock ahead, he said, would be a decline in general market conditions: “Markets over the past month have been choppy, and if the mood does turn sour in April, it could dampen risk appetite slightly.” Ong added: “It is always risky in the weeks leading up to an IPO,” but he didn’t see any significant roadblocks leading up to Coinbase’s listing.

Still, the crypto exchange has been dogged by service outages periodically through its history, a complaint that was raised again this week in a New York Times article: “The company sometimes still struggles to address basic customer service complaints,” said the paper, and quoted attorney David Silver that if Coinbase wants to be “the Goldman Sachs of crypto,” then it “needs to maintain quality customer support.”

Meanwhile, Neil Wilson, chief market analyst for Markets.com trading, noted in a client letter at the time of Coinbase’s S-1 SEC filing that the firm’s earnings are inextricably tied to crypto prices. Indeed, most of Coinbase’s net revenue is from transactions in just two crypto assets: Bitcoin and Ether — and the volatility of those cryptocurrencies could make Coinbase’s earnings soar or plummet accordingly.

Indeed, the company itself acknowledged in its filing: “If demand for these crypto assets declines and is not replaced by new demand for crypto assets, our business, operating results, and financial condition could be adversely affected.”

Gupta, too, acknowledged that Coinbase had exposure to crypto, and “crypto price volatility impacts their business” in terms of revenues, liquidity and other areas, but she viewed this as another positive connected to the direct listing, as it might guide other crypto-native firms looking to follow in the exchange’s footsteps:

“How their [i.e., Coinbase’s] public stock [shares] weather bull and bearish markets would provide a roadmap for lots of blockchain companies to explore IPOs as a potential liquidity and fund raising route.”

Overall, should this still be viewed as a significant event for the blockchain and cryptocurrency industry — one that could spur more crypto adoption and/or blockchain technology innovation?

The Coinbase Nasdaq listing “will be a watershed moment for the entire blockchain and cryptocurrency industry,” said Ong. It has already shown Wall Street how large the crypto industry is, “and they have certainly woken up to the potential opportunities in this industry.”

Any offering of Coinbase’s projected size will “inevitably motivate more people and firms to try and get a piece of the action,” said Trainer, and “can only help to propel the blockchain and cryptocurrency industry further.”

Speaking as an investor — indeed, one playing now in the SPAC IPO market — Gupta stated that “Coinbase will be the torchbearer for the whole blockchain community in the public market,” adding: “If you look at [crypto] exchanges across the world from Israel to India to Singapore, every exchange pitch is [based on the claim] that ‘it is the Coinbase’ of its region.”

According to Gupta: “Companies like CoinShares have already tested the water in more friendly European market exchanges,” while in the U.S., mining firm Bitfury’s SPAC IPOs have been oversubscribed. Events like these signal “great timing for Coinbase,” whose technology and revenue exceed many other IPO candidates in the United States.

Overall, a Coinbase Nasdaq listing would “put cryptos at the heart of Wall Street,” Wilson told Cointelegraph. Blockchain and cryptocurrency firms would no longer be outsiders looking in — rather, they would now be “part of the club.”

JPMorgan report: Eth2 could kick-start $40B staking industry by 2025

Former OCC official says crypto has backing but dollar ‘may not’

JPMorgan report: Eth2 could kick-start $40B staking industry by 2025